New York’s pretty close to Ireland so I get a lot of requests from friends for what to see and do while they’re visiting. Itineraries almost always starts and end in Dublin and I’m happy to simply forward my list of Dublin favourites which I update anyway during each visit. Recently, however, I finally had a chance to share another list, covering where I grew up: in and around Drogheda. Of course, Newgrange was (quite rightly) the primary reason for the visit but there was a hotel booked, time to be spent in the town itself, and recommendations were sought.

My list is reproduced below but, first, why was a request for Drogheda recommendations so long coming? As a large-ish, historic town situated only thirty minutes by train from the capital Drogheda could be flooded with visitors: smaller towns in remote parts of country (Kenmare, Lisdoonvarna, Carlingford, etc.) offer a lot more to visitors without having anything like the the mind-blowing attraction of Newgrange nearby. However, public transport is poor: the express train only runs a few times each day from a small station located almost 2km outside the town centre and those hoping for a bus onwards to Newgrange will, if they can find it at all, discover the schedule bearing little relation to the visitor centre’s opening hours. Consequently, Newgrange has become, for tourists, a day trip from Dublin before they hit the rest of the country rather than a short excursion from the town itself (a pattern repeated across Ireland but it does seems particularly unfortunate in the example of Drogheda, situated on a major train line so close to Dublin).

Thanks partly to this, Drogheda’s really only worth a half day or so in conjunction with Newgrange and Carlingford – but here’s how you can spend that time well (note that this list is short on pubs only because most of my friends back home live in Dublin – suggestions welcome):

If it’s a nice day and you’ve a few hours to kill, consider walking or bicycling along the banks of the River Boyne on the Boyneside Trail. From town, you can access it from the Ramparts Park on the south side of the river. This will take you all the way to the Battle of the Boyne Visitor Centre and under the Mary McAleese Boyne Valley Bridge. In fact, you might consider spending the morning at Newgrange before finding a ride down to the Battle of the Boyne Visitor Centre – roughly a ten minutes drive – and walking along the river into town.

Stumbled upon some local history during a rabbit hole of link following which started at a dissection of the neon signs in Google’s New York office.

There are two of these signs; each is unique and spells the word “Google” in lettering emulating famous New York signs from the past and present. It seems that the right-most “g” in the sign pictured above is modeled on a restaurant formerly located at the corner of West 4th Street and Sixth Avenue known as “Groceria”. 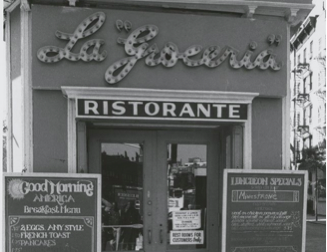 If you know this corner then you probably also know that the stretch running along Sixth Avenue from West 4th Street down to Bleecker Street is something of an anomaly in the leafy West Village: the best description I encountered is that’s

a little piece of old Times Square, hearkening back to a delightfully crummy cacophony of sex shops, tattoo parlors, and hot dog stands

It seems that Groceria formerly occupied all of this space; a bright sun-lit Italian trattoria sporting elegant brass fixtures and frequented by celebrities such Frank Sinatra, Eli Wallach, and Nancy Walker. With its espresso machine and supermarket-like offerings it sounds like it was well ahead of its time and would thrive in today’s West Village.

Now, it seems the new owner of 333 Sixth Avenue is attempting to remodel the block by buying out the current tenants, Crazy Fantasy being just the first to go. Will they attract another neighbourhood asset like Groceria? As Vanishing City notes, it’s more likely we’ll get another frozen yoghurt option.

I’m just struck by how the redevelopment of the undesirable seedy block around the corner from my apartment may be what causes my own rent to rise to the point where I’m forced out of the wider neighbourhood altogether. Careful what you wish for!

One of my favourite things about visiting San Francisco is simply walking the streets and part of the attraction of the streets is the street art found on buildings all over the city. Mission District is the most famous and probably has the most murals but I stumbled on these contrasting efforts in the Tenderloin and Haight areas, respectively.

I first visited California about five years ago on a music trip and two thoughts have remained with me:

Ever since, I’ve avoided Los Angeles and vowed to explore those Sausalito hills. Today would be that day!

I started out at the Asian Heritage Festival taking place nearby in Civic Center. Things were just getting going but I picked up a t-shirt, had a coconut waffle and tried some Kona coffee (none of which having much to do with Asia) before daring to try Dottie’s True Blue café. Overhearing a member of the middle portion of the queue tell his mobile phone that “yeah, we’ve been queuing here for an hour and a half now; but, you know, it’s kind of a famous place”, I started to look further. 45 minutes of wandering the Tenderloin later (as close to the streets of “The Wire” as I’m likely to find on this trip and a bigger contrast with the streets of Zurich would be hard to imagine), I settled on a guidebook-recommended Indian and Pakistani eatery called Shalimar (embarrassingly enough, as it turned out, right next door to Dottie’s).

The weather has been terrible on this trip so I didn’t venture out with any plans for a day trip but, by now, the sky was clearing up so I decided maybe it was worth heading out to Sausalito after all. Rough plan was to walk across the Golden Gate Bridge, take the bus to Sausalito, wander about for a bit then take the ferry home. Approaching the bridge, this plan seemed a little optimistic: the sky turned grey again; fog appeared: the bridge walk was cold, foggy and blustery. Atmospheric, certainly, and definitely worth seeing the fog billowing in from the sea…but not something I’ll be doing again soon.

Sausalito turns out to more or less as expected: a small town on the bay with a single main street (Bridgeway) hugging the water and lined with upmarket shops and restaurants. Nothing remarkable except for the location which altogether makes it a very pleasant place to while away an afternoon. The weather was warm and sunny, with the fog rolling over the hills making for some impressive pictures.

Bridgeway offers some wine shops offering, in turn, wine tastings. The assistant at the first turned out to have Swiss parents and to have visited Zurich several times down the years; the second – Bacchus and Venus – is less chatty but offers particularly generous portions (that they also inexplicably have a branch in Truckee, Nevada, is worth mentioning because it’s so bizarre and a rare opportunity to use the word “Truckee”); I sampled four reds before staggering back onto the street. A little later, I grab a quick delicious flame-grilled burger at Hamburgers Sausahlito (“where the customer is rarely right”) before hopping on the 6.30 ferry back to the city through the mist, Golden Gate nowhere in sight.

I still did not cut the grass, though I did finally find the lawnmower in the basement. With my upcoming trip to San Francisco, I now have a deadline (of sorts – maybe they’ll kick me out and I won’t have to worry).

This May Day (Labour Day) weekend,

Before I wrote this is it felt like just a long and uneventful weekend (which was fine, considering it’s been a few weeks since I was in Zurich) but I guess it wasn’t so bad.

Man walks out onto stage, sits down at the keyboard, plays the entire Goldberg Variations from beginning to end, gets up and walks back in again.

At least, I imagine that’s what happened: I missed the first couple of variations and, being new here and all, opened the wrong door into the church in – of course – the noisiest manner possible. A lovely church, great playing, no asking price; a good night! Part of a little-advertised Bach season at the Bühlkirche that I only learnt about because I walk past it every morning and spotted the poster in the nick of time.

A little bundle of joy appeared on the doorstep this morning minutes before leaving the house for a weekend in Amsterdam. Sure, the management company charges 50 CHF for a few postbox and doorbell name tags but then they go and do this.